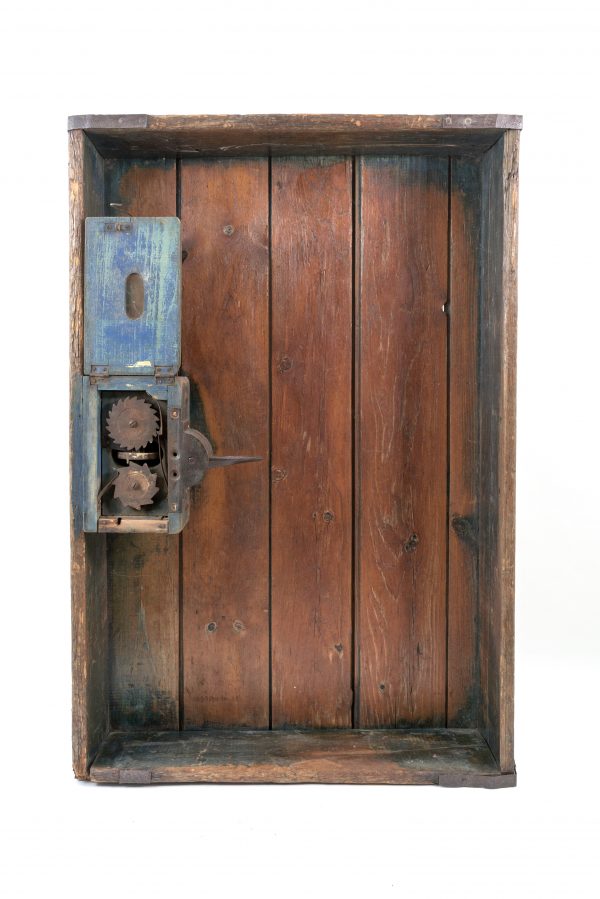 A very nice piece of primitive Americana.  It is a Patented grain counter, machine in working condition.  It is made of wood, painted blue with yellow-gold graphics & striping.  The front panel of the outer box is painted “-. -. NESMITH’S PATEN’T GRAIN COUNTER  // MANUFACTURED BY // -. -. NESMITH WASHINGTON, ILLINOIS”.  Inside one end panel is painted the word “THRESHER” with another word above that, we can not make out.  On one outside end panel of the mechanism box is painted “NESMITH // WASHINGTON, ILL.”.

Our research says this tally box was used with a threshing machine, powered by horses.  The horses were hitched to something like a big wheel, and there were gears in the middle that turned a shaft and powered the thresher.  As the grain came out of the thresher, a man would shovel it into a bushel container. Every time it was full, he would hit this lever and the wheels would advance by one number. That was how they kept track of how much grain was harvested.  The mechanism box has a glass-covered oval hole in the lid.  A wheel can be seen inside, with numbers that turn when the lever on the outside is activated.

Condition: All metal is rusty – Some paint missing from use and weather – Much of the lettering on the front panel is hard to read – Counter mechanism lid is missing latch key and is held closed with a piece of wire probably replaced during its period of use – Window glass is cracked but intact – Mechanism appears to function